Outreach is a very important part of my life, and I am so excited to share my love of STEM with just about anyone who will listen. In all of my outreach activities, my number one goal is not necessarily to convey knowledge (although, I do hope people learn a few new things). But rather, it is to inspire curiosity, enquiry, and a sense of wonder about the world about our noisy universe.

My outreach activities have taken me to pubs, city streets, high school auditoriums, outdoor movie theaters, conferences, and planetariums. Learning how to effectively convey our science is an important skill, and a great way for scientists to give back to our community.

Every summer, the University of Chicago’s Office of Civic Engagement holds a family outdoor movie series called Midweek on the Midway. This year for the showing of ‘Star Wars: The Last Jedi’, myself and a team of women in physics and astronomy talked to families about the science of Star Wars. Our conversations and activities included topics on artificial intelligence, faster-than-light travel, crazy weird exoplanets, lasers/lightsabers, the habitability of other worlds, and of course…stars. We even had our participants try their hand at designing their own stellar systems. Some were very complex, including multiple orbiting planets, extensive moon systems, and even binary or trinary star systems.

Now called the Aquarius Project, The Adler Planetarium has partnered with local teens to build a device to dredge the bottom of Lake Michigan looking for a meteorite that impacted in the Lake on February 6, 2017. I was lucky enough to get to go on a boat trip this summer with some of the Adler Teens who helped to build the meteorite-collecting sled. After dragging the sled behind the boat for 3 hours, we came home with buckets full of meteorite candidates. You can check out the visualization I helped to make of the meteoroid’s final orbit within the solar system before plummeting into Lake Michigan on my Visualizations+ page.

I love that I get to spend one day a week at Adler Planetarium as part of my NSF Fellowship. When I’m at Adler, I participate in a variety of their public programs. Recently, we started a Book Club. Our first Book Club event featured astronomers in conversation with local Chicago writers who were all inspired by space in some way.

I was paired with murder-mystery writer Lori Rader-Day who set her most recent novel Under a Dark Sky in a dark sky park – a great place for a murder! We discussed the international dark sky park movement, light pollution, and broader themes about humankind’s understanding of the universe and our unique place within it.

Guess what…we are having a second Soapbox Science Chicago this coming summer! Mark your calendars for Saturday July 13 from 12-3pm at Navy Pier!

I was so excited to be able to bring Soapbox Science to Chicago last year. Soapbox Science is an outreach platform to showcase women scientists and dispel gender-based stereotypes in science. It was originated in London, England in 2011. I was introduced to Soapbox Science while I was a postdoc at the University of Exeter in England. In 2017, I participated as a speaker in Exeter’s event (see the next post below). Upon moving to Chicago, I jumped at the opportunity to make Chicago the very first United States city to hold a Soapbox Science Event.

We held our event on Saturday July 21 at Chicago’s iconic Navy Pier. The weather threw us a curveball with rain and strong winds. Fortunately, we had a plan! We retreated inside Navy Pier’s atrium where our scientists had conversations with approximately 400 visitors and introduced an estimated 1,500 more to the concept of Soapbox Science for the first time.

But, we couldn’t have done it without the help of our more than 20 volunteers who did everything from keeping track of the number of visitors, assisting our speakers, and performing audience evaluations.

Last year, we selected 12 of the top early career women in STEMM from nearby universities and institutions in Illinois, including one speaker who joined us from Kansas. Our speakers engaged visitors with a broad range of topics – astrophysics, planetary science, particle physics, ecology, neuroscience, cancer research, mathematics, and material science. They also participated in a science communication workshop to prepare them for their day on the soapbox. You can find out more about last year’s event by scrolling through our Twitter feed – follow us at @SoapboxSciChi.

Here is our list of speakers from 2018. You can also find out more about them and their presentation topics on our Twitter feed or here. 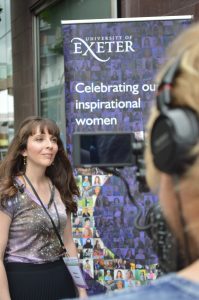 In the summer of 2017, I was thrilled to be able to participate in Exeter’s Soapbox Science event. Our event was held in a busy shopping center on a Saturday afternoon, thereby catching a diverse audience. I literally got to stand on a soapbox and proclaim to the world my love of solar physics, and explain to passers-by why we should care about stellar magnetism in the first place. I was joined by 11 other amazing women scientists from the Devon and Cornwall area.

My topic was “The Solar-Stellar Connection: From the Sun to Other Stars with Habitable Worlds”. In my hour on the soapbox (yes, we literally got to stand on soapboxes) I introduced the concept of magnetism, explained how stars can generate magnetic fields ‘from scratch’, discussed observations of the Sun, and talked about the magnetism of stars with possibly habitable worlds. I showed the audience snippets of my computer code that models how ropes of magnetic field travel from inside the Sun (and similar stars) to the surface. Audience members had key roles to play, for example, demonstrating magnetic tension by stretching a bungee cord. I used beach balls to represent a selection of low-mass stars, with reasonably accurate starspots drawn on each one. One of my key ‘take home’ points for the audience is that an in depth knowledge of the Sun is key, especially in our increasingly technological world. Extreme solar events can expose astronauts to dangerous levels of radiation, damage earth-orbiting satellites, hinder telecommunications, and wreak havoc on our worldwide electrical power grid. To truly understand our Sun and ultimately predict its magnetically-driven behavior, we need to understand what goes on in its interior to create this magnetism in the first place (that is where my research comes in).

I also wrote a blog post for Soapbox Science about finally, after too too many years, having the courage to say ‘I’m a nerd, and a geek, and that’s okay!’ Click on the link if you’d like to give it a read.

Videos of our event has also been posted to YouTube. Check out this one, where I talk about the Sun, my female science role models, and encouraging young women to study physics.

This video is an overview of our 2017 Exeter event. During the course of our three hour residency, we shared our knowledge with greater than 1000 people (despite the rainy weather). Our science was quite diverse, covering many specialized topics within astrophysics, physics, geology, genetics, and engineering.

Here are some postcards that I created during the summer of 2016 showcasing the awesome science done by members of the University of Exeter Astrophysics Group (where I was from Sept. 2014 – Sept. 2017). If you want some copies, let me know.